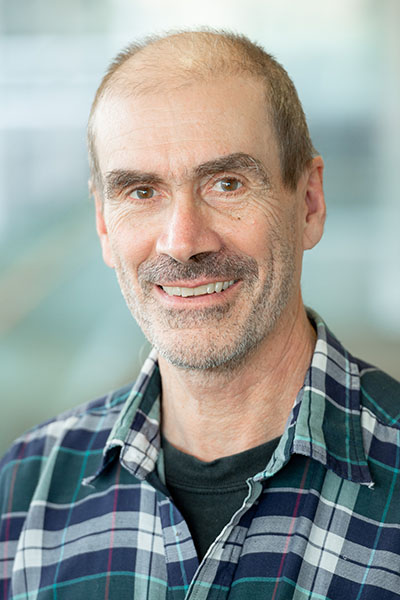 Jeff is a member of the Earth and Environmental Sciences Department at UBC’s Okanagan campus, and also holds an adjunct professorship in the Department of Geography at the University of Northern British Columbia. Jeff is not that well-traveled but has moved a lot, having lived in five provinces in Canada and eight US states.

Jeff is responsible for a variety of courses pertaining to environmental science and especially for the Freshwater Science (B.Sc.) Degree program. Jeff is a member of the Society of Canadian Limnologists, the American Society of Limnology and Oceanography, and American Geophysical Union. He was a founding board member of the British Columbia Lake Stewardship Society, and the Southern Interior Forest Extension (now FORREX) and Research Partnership, and NSERC Representative at OUC. Jeff and Rob O’Brien collaboratively operate the Water Resource Science/Trace Analysis Facility.

Away from the office and lab, Jeff, and daughter Kate can often be found on the trails of BC — on skis and snowshoes in winter and on foot, horseback or mountain bike for the rest of the year. He also enjoys fishing, canoeing, and sailing in the recently restored sailboat.

Schindler, D.W. and P.J. Curtis (1997) The role of DOC in protecting freshwaters subjected to climatic warming and acidification from UV Exposure. Biogeochemistry 36:1-8.

Curtis, P.J. and P.Walker (1994) Cadmium mobilization from a streambed in response to experimental acidification and neutralization. Water Res. Res. 30:3449-3454.

Apologies, but no results were found.